Shipwreck beach, one of the worlds best beaches!!!

Dear Visitor,
After making the decision to visit our beautiful island, you have to take a swim and swim in the blue waters of this beach.
One of the top 10 world beaches!!!
Her name? Shipwreck

The “wreck” is one of the most beautiful places on the island and can be characterized as one of the most beautiful and famous beaches of the world! The beauty of this landscape can enchant you, and the serenity that you feel when you dive into the blue waters of this beach is indescribable. Thin clear waters, white sand, stunning steep rocks, and the half-moon-covered carpet of a ship make up a fantastic backdrop.
As you can see, its name came from a shipwreck, a ship that due to bad weather
condition and its damaged machine
was out of the way leading to the cliffs of the northwest side of Zakynthos.
His story began on September 30, 1982 when the merchant ship “Panagiotis”, where he smuggled and smuggled cigarettes, was washed out at the most famous spot. It is claimed that this ship belonged to a Kefalonite and his captain was Charalambos Kombotrakos – Kotsoros. Panagiotis’ ship received illegal cigarettes from the ports of Turkey, Yugoslavia and Albania by loading them on other high-speed boats to their neighboring Italy.The illegal cargo of cigarettes was accompanied by two Italian the smugglers – who were responsible for overseeing the tradition – by the Kefalonian captain and by the Kefalonian crewmen.
On that day, the captain and the crew thought of selling these illegal cigarettes for their own account and closing Italian smugglers in a cabin. After “imprisoning” the Italians, they drove the ship to the place where before this event the coast was called St. George. As mentioned, due to the adverse weather conditions, the captain and the crew did not manage to finish their work and so they decided to unload the ship and not loosen the ship from the ground. But things made it hard for them, and boxes of illegal cigarettes began to be washed out in the sea. So they decided to let the Italians down and leave the ship climbing up the steep slope.
Over time, the inhabitants of Zakynthos began to worry about the environmental disaster that this ship would create with its cargo, and all the more so for tourism. But knowing that this shipwreck would create one of the world’s nicest and most beautiful beaches.
Eventually the ship was plundered by the inhabitants of Zakynthos who made it a sheet and a feather. The Italian smugglers were deported to their homeland.
It is worth visiting this place and you will not regret enjoying this beautiful sight.
You have two choices and the choice is yours either you will admire it from above by simply taking your car or your motorcycle or you will get one of the various beaches that are accessible there enjoying your journey and your dive!
Will you remember … 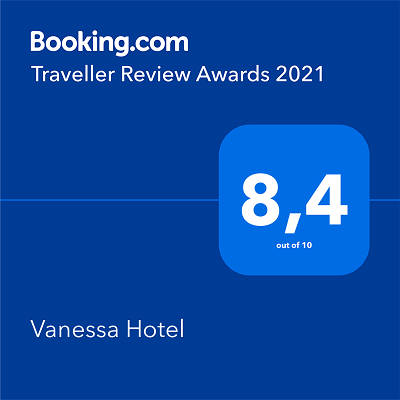 OPA!!!! Join us for Greek night at Vanessa Pool

We wish you and your loved ones a very Happy Easte

We hope you all had a Merry Christmas and managed

Dear guests, Though our hotel is does not book di

The best thing about the hotel is definitely the swimming pool with the water slide and the very spacious rooms.

The bar-restaurant was good, the staff courteous and helpful. In front of the hotel a supermarket open until 24 where you could buy everything!

Overall, the price was excellent !!!!!

Pleasant and courteous staff, a nice welcoming and clean hotel with large rooms especially for large families like me (5-member) It was super !!!!!

Had a great holiday here, would definitely go again if we went back to Zante !

Had a great 2 weeks here with our friends and children. Great value, right in the middle of the resort (but not too noisy either). Bar and staff were great. Would definitely recommend !!

The food was very good.

The welcome and flexibility of the hotel staff was fantastic and we felt safe all the time whatever the time of day or night. The rooms were very big. I had the twin room with the kitchen facilities and my daughter had the double room which led onto a big balcony. The bathroom was a lot better than most hotels on Greek Islands. We had a huge shower area and hot water whenever we wanted it!! Which is unusual.

The hotel was great my wife and I enjoyed our stay.

We wish we could have stayed longer it was perfectly situated in the middle of Kalamaki close to all bars and restaurants. Very quiet at night and the staff was great. We will definitely be back!

Warm and friendly welcome from everyone bar staff were excellent!

location was great, facilties were good it was great value for money all round. For a 2 star hotel we werent expecting much and everything exceeded our expectations. Will definately visit again.

We had a great time.

The friendliness and cleanliness of Vanessa made our stay that much more comfortable.

We loved waking up to the breakfast by the pool bar and our kids loved the pool - including a water slide! Will definitely come again.

Pool small but never a problem getting a family space to sit for the day.